Positions and types of N-glycans attached to the human and rat CBGs analyzed, and the RCL sequence of human CBG. (A) Human and rat CBGs and the glycosylation-deficient mutants studied. Human CBG mutants include: CBG N347Q and a naturally occurring variant CBG T349A (Simard et al. 2015) in which the N-glycosylation site within the RCL is disrupted; CBG N238Q, CBG N238D and CBG T240A in which the N-glycosylation site at N238 was disrupted; CBG N238 containing only one N-glycosylation site and CBG N238+N347 containing only two carbohydrate chains. Rat CBG N230D that disrupts the N-glycosylation site at N230. (B) General structural features of N-glycans predicted to be attached to human or rat CBG expressed by glycosylation-competent CHO-S cells or glycosylation-deficient CHO cells, i.e. Lec1 cells that lack N-acetylglucosaminyltransferase-I and do not synthesize complex or hybrid N-glycans or Lec2 cells that lack the CMP-sialic acid Golgi transporter and do not add sialic acid residues. These proposed structures are based on studies of glycoproteins produced by these cell types (Patnaik & Stanley 2006), and some heterogeneity is to be expected. N-x-S/T is the consensus N-glycosylation sequon. (C) Sequence of the human CBG RCL showing the locations of cleavage sites for neutrophil elastase, chymotrypsin and the P. aeruginosa protease LasB.

N-Glycosylation at N238 in human CBG and N230 in rat CBG is required for high-affinity steroid binding. (A) Human CBG N238Q and CBG T240A produced by CHO-S cells and FPLC-purified show the expected reduction in molecular size when compared to fully glycosylated CBG. These mutants have much lower cortisol-binding capacities as compared to CBG or CBG N238 with only a single N-glycan. (B) Human CBG N238D was undetectable in the culture media but present in cell pellet extracts of transfected CHO-S cells. (C) Loss of N-glycosylation at N230 in rat CBG N230D reduces its molecular size and disrupts its steroid binding. Western blot of rat CBG and rat CBG N230D in 5 µL of concentrated and buffer-exchanged CHO-S cell culture media demonstrates that similar amounts of both proteins were secreted. Scatchard analysis of similar amounts of rat CBG (black circles) and rat CBG N230D (white circles) adjusted based on their immunoreactivity. Positions of molecular size markers (kDa) are shown.

Differences in N-glycosylation influence the steroid-binding affinity of human and rat CBGs. Scatchard analyses of [3H]cortisol binding to (A) human CBG and (B) a human CBG mutant with only a single N-linked glycan at N238, and (C) [3H]corticosterone binding to rat CBG. Human and rat CBGs were produced by CHO-S cells, as well as by glycosylation-deficient Lec1 or Lec2 cells, and purified by FPLC for analysis, as described (Simard et al. 2015). Representative data and linear fit are shown and mean ± s.d. dissociation constants (Kd) are shown in parentheses for replicate experiments (n = 5). One-way ANOVA followed by Tukey’s multiple comparisons test for each group revealed that the steroid-binding affinity of the CBGs produced in Lec1 cells is significantly higher than those produced in CHO-S or Lec2 cells (A and B, P < 0.01; C, P < 0.05).

Effects of inhibiting glycosylation or removing N-glycans on human and rat CBG steroid binding. The CBGs were expressed in CHO-S cells in the presence or absence of the N-glycosylation inhibitor tunicamycin (Tun) and the culture media were concentrated and buffer-exchanged for Western blotting and steroid-binding capacity measurements. Reductions in apparent molecular size and loss of micro-heterogeneity are consistent with the absence of glycosylation. The steroid-binding capacities of human and rat CBGs produced by tunicamycin-treated CHO-S cells were compared as a percentage (%) of those produced by untreated (Ctl) CHO-S cells after adjusting their amounts based on Western blotting. Similar amounts of human CBG, rat CBG, and human CBG N238 produced in untreated CHO-S cells were also incubated with PNGase F (PNG) to remove N-glycans. The amounts of PNGase F and incubation time were optimized to ensure that removal of N-glycans was as complete as possible, and similar results were observed when 500 units of PNGase F treatment were used for 3 h or 16 h at 37°C. Western blotting was used to assess the efficacy of deglycosylation and steroid-binding capacities were expressed as a percentage (%) of those obtained for the untreated (Ctl) samples. Positions of molecular size markers (kDa) are indicated.

Impact of quantitative and qualitative differences in N-glycosylation on proteolysis of human CBG. (A) FPLC-Purified human CBG and CBG N238 produced in CHO-S, Lec1, or Lec2 cells were incubated with neutrophil elastase (0.1 µg for 10 min at 37°C), chymotrypsin (1 µg for 10 min at 37°C), or P. aeruginosa media (5 µL for 3 h at 37°C) containing LasB and subjected to Western blotting. Reductions (~5–10 kDa) in molecular size were observed after incubation with proteases. (B and C) Western blots of human CBG N238 after limited incubation times with different amounts of chymotrypsin or LasB. Positions of molecular size markers (kDa) are indicated.

Impact of N-glycosylation on human CBG steroid binding after incubations with proteases that target the RCL. FPLC-Purified human CBG and CBG glycosylation mutants produced in CHO-S and Lec1 CHO cells were incubated with (A) neutrophil elastase (25 ng for 10 min at 37°C), (B) chymotrypsin (0.25 µg for 10 min at 37°C), or (C) P. aeruginosa media (2 µL for 3 h at 37°C) containing LasB. The amounts of enzymes and incubation times were adjusted to obtain ~35–50% of residual steroid-binding activity for un-mutated CBG, and similar amounts of un-mutated and mutated CBGs were tested in relation to their steroid-binding capacity values. Cortisol-binding capacity values are expressed as a percentage (%) of values for the respective untreated samples (Ctl). One-way ANOVA followed by Dunnett’s multiple comparisons test (for CHO and Lec1 groups separately, in A, B, and C) were performed to assess differences (*P < 0.05; **P < 0.01; ***P < 0.001) between the un-mutated CBG and the CBG glycosylation mutants. One-way ANOVA followed by Tukey’s multiple comparisons test were performed to assess differences (†P < 0.05; ††P < 0.01; †††P < 0.001) between CBG N238 and CBG N238+N347 in each group.

Evidence that N-glycosylation at specific sites protects against CBG proteolysis and loss of steroid-binding activity. FPLC-Purified human CBG and several CBG glycosylation-deficient mutants were incubated with neutrophil elastase (25, 50 and 100 ng for 10 min at 37°C), chymotrypsin (0.25, 0.5 and 1.0 µg for 10 min at 37°C) or LasB (1, 2 and 5 µL for 3 h at 37°C). Cortisol-binding capacity values are expressed as a percentage (%) of values obtained for the respective untreated samples (Ctl). Two-way ANOVA followed by Bonferroni tests were performed for each group (neutrophil elastase, chymotrypsin, and LasB) to evaluate the effects of enzyme concentration on loss of cortisol-binding capacity, and differences between CBG and the various CBG glycosylation-deficient mutants. When compared with the un-mutated CBG, all of the CBG glycosylation mutants tested had significantly greater reductions in cortisol-binding capacity at the lowest concentrations of enzymes tested (*P < 0.05; **P < 0.01; ***P < 0.001), and further reductions were observed at higher enzyme concentrations in all cases. The greatest losses in cortisol-binding capacity were observed after treatment of the CBG N238 mutant with only one N-glycosylation site, and this was significantly abrogated (†P < 0.05; †††P < 0.001) by the presence of an N-glycosylation site within the RCL at N347 as well as at N238.

Structural models showing the extent of N-glycosylation of rat and human CBGs in stressed (high affinity with intact RCL) and relaxed (low affinity with cleaved RCL) conformational states. (A) The rat CBG in its stressed conformation (PDB ID 2V95), with a close-up of the steroid-binding site with the positions of H9, R10, and W362 colored orange. (B) Human CBG in its relaxed conformation (PDB ID 4BB2), with its cleaved RCL inserted as a β-sheet colored red. Models were generated using the PyMOL Molecular Graphics System software (http://pymol.org) and the online tool for in silico glycosylation of proteins GlyProt (http://glycosciences.de). The N-glycans attached in various positions are shown based on their reported most frequent compositions in human CBG (Sumer-Bayraktar et al. 2011). N-glycans that could not be added because they are in regions of disorder in the crystal structures are indicated in boxes (at N3 and N330 in rat CBG, and at N9 in human CBG). Notably, the comparison between stressed and relaxed CBG structures shows the displacement of N347 with its associated N-glycan in human CBG after RCL cleavage. Both structures show β-sheets (blue), α-helixes (green), loops (cyan), and N-glycans in gray except those at N238 in human CBG and N230 in rat CBG (purple), and those attached to the cleaved RCL of human CBG (at N347) and the intact RCL of rat CBG (at N330), which are colored orange. 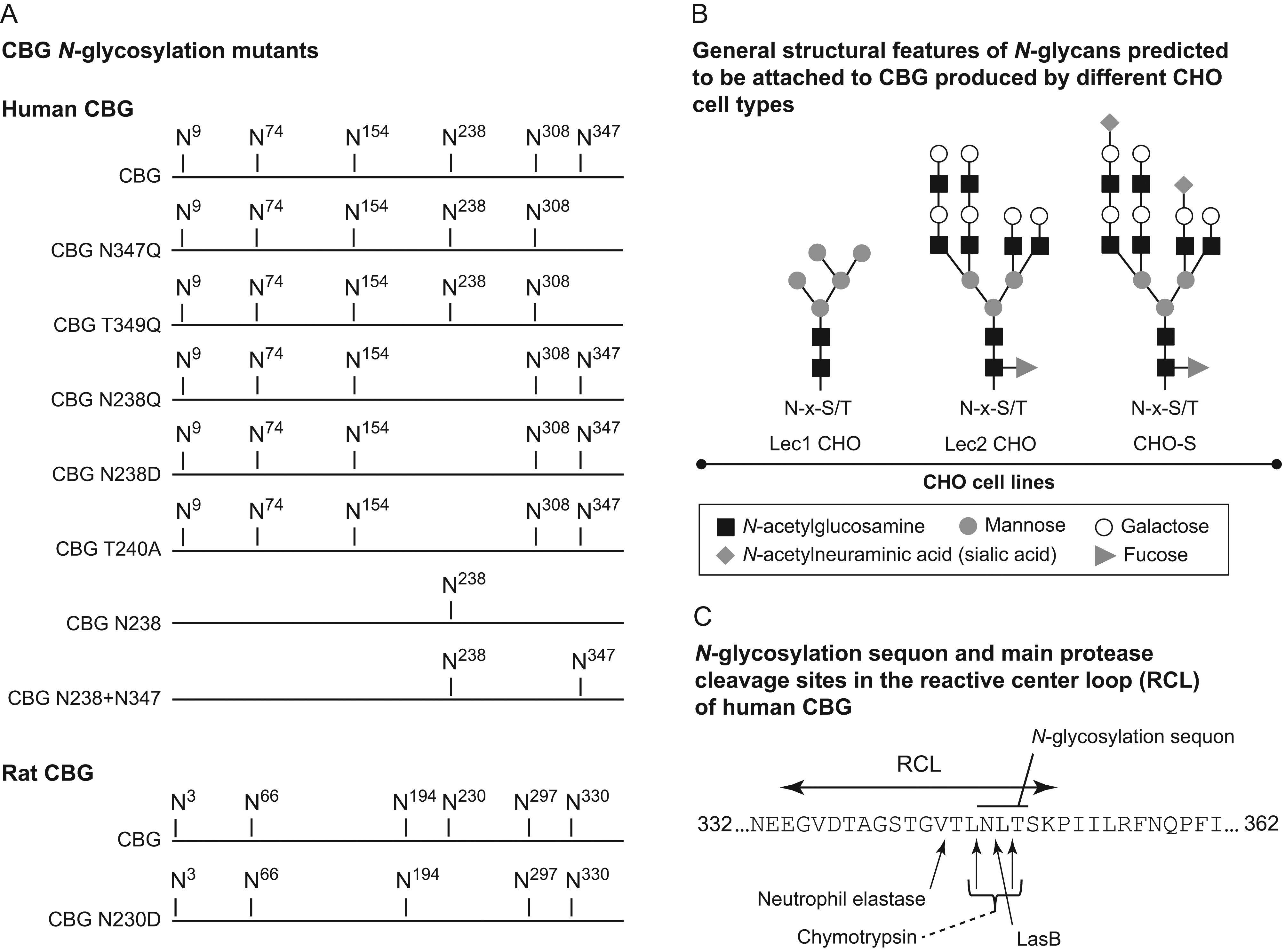 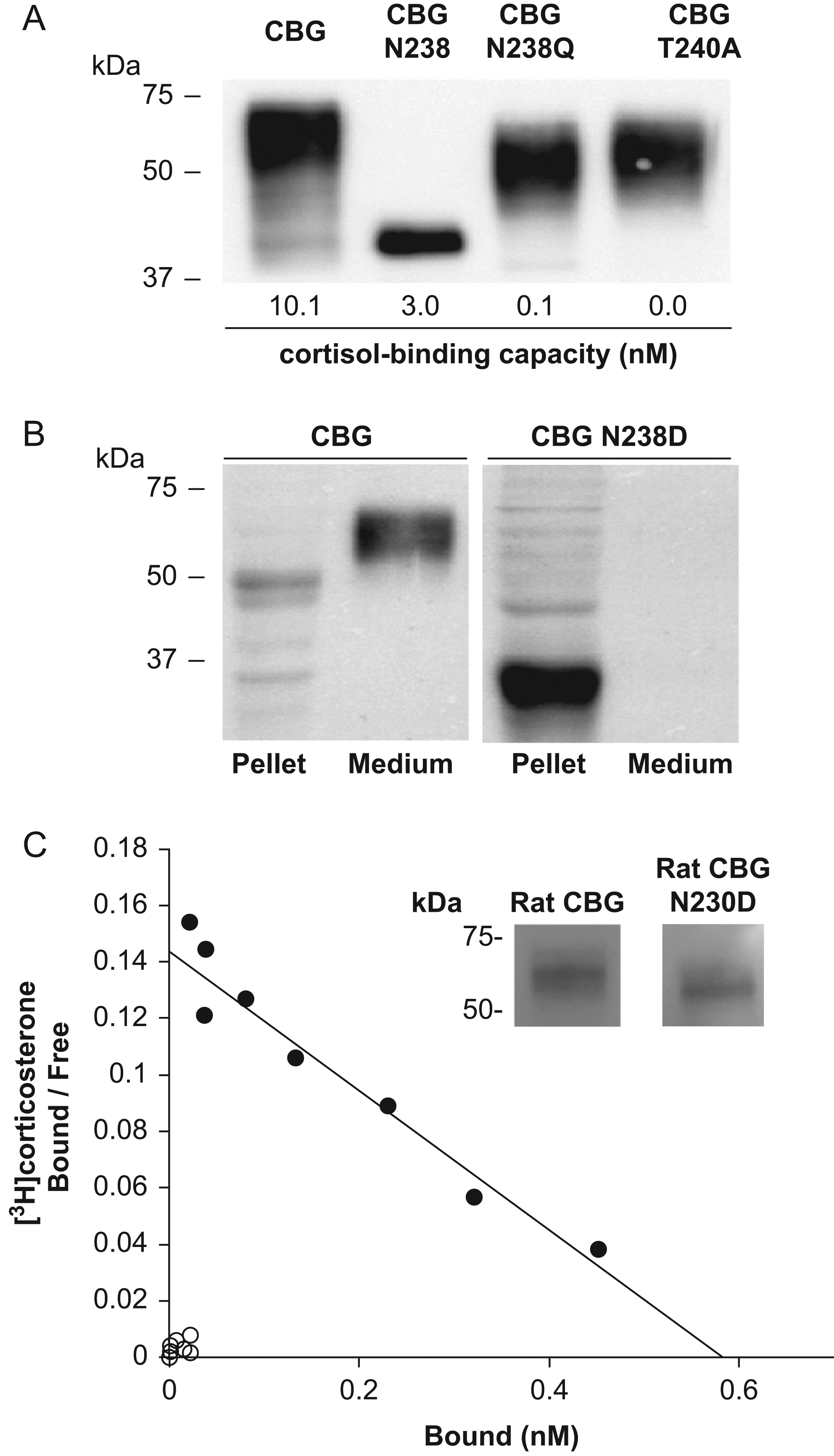 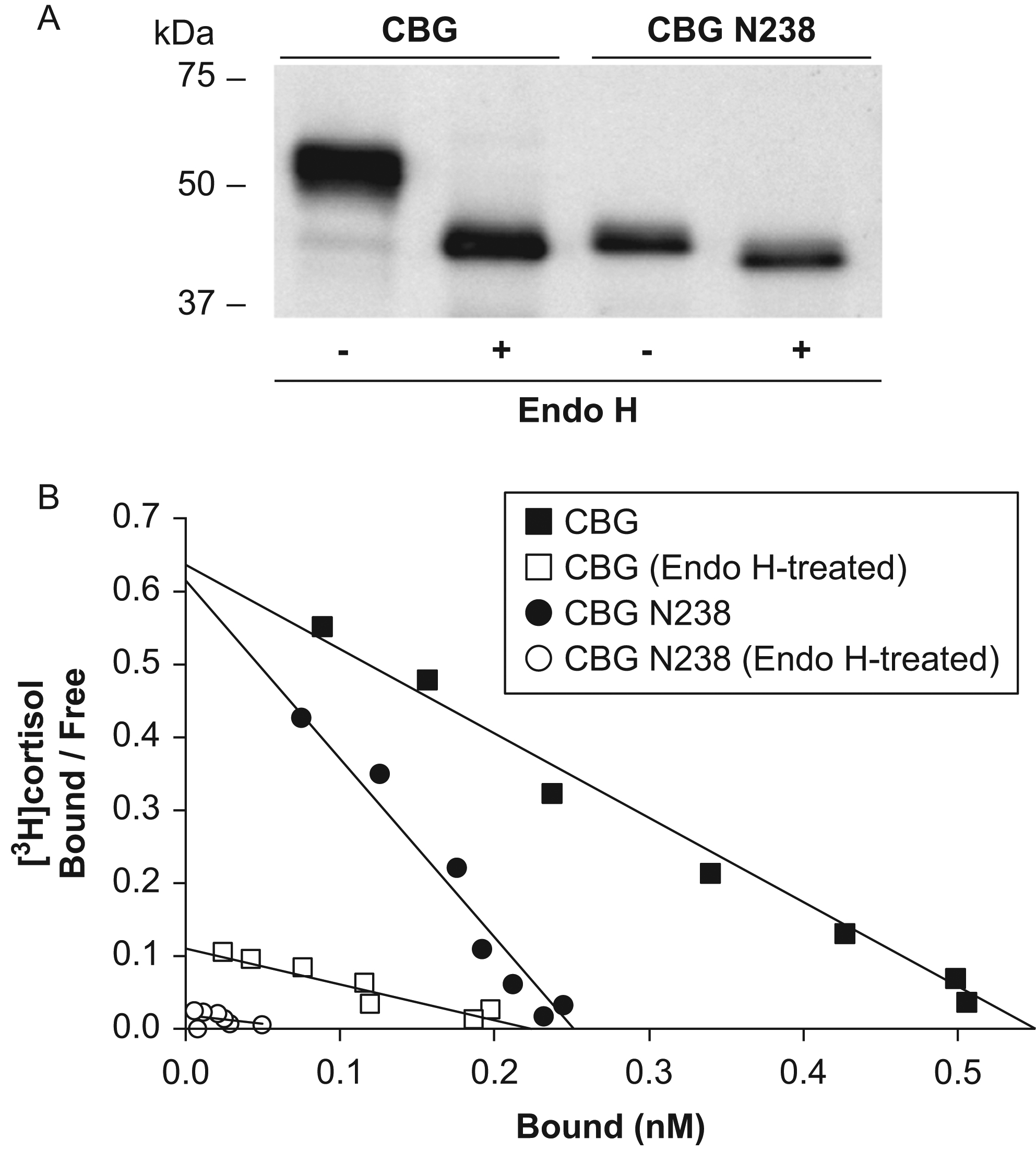 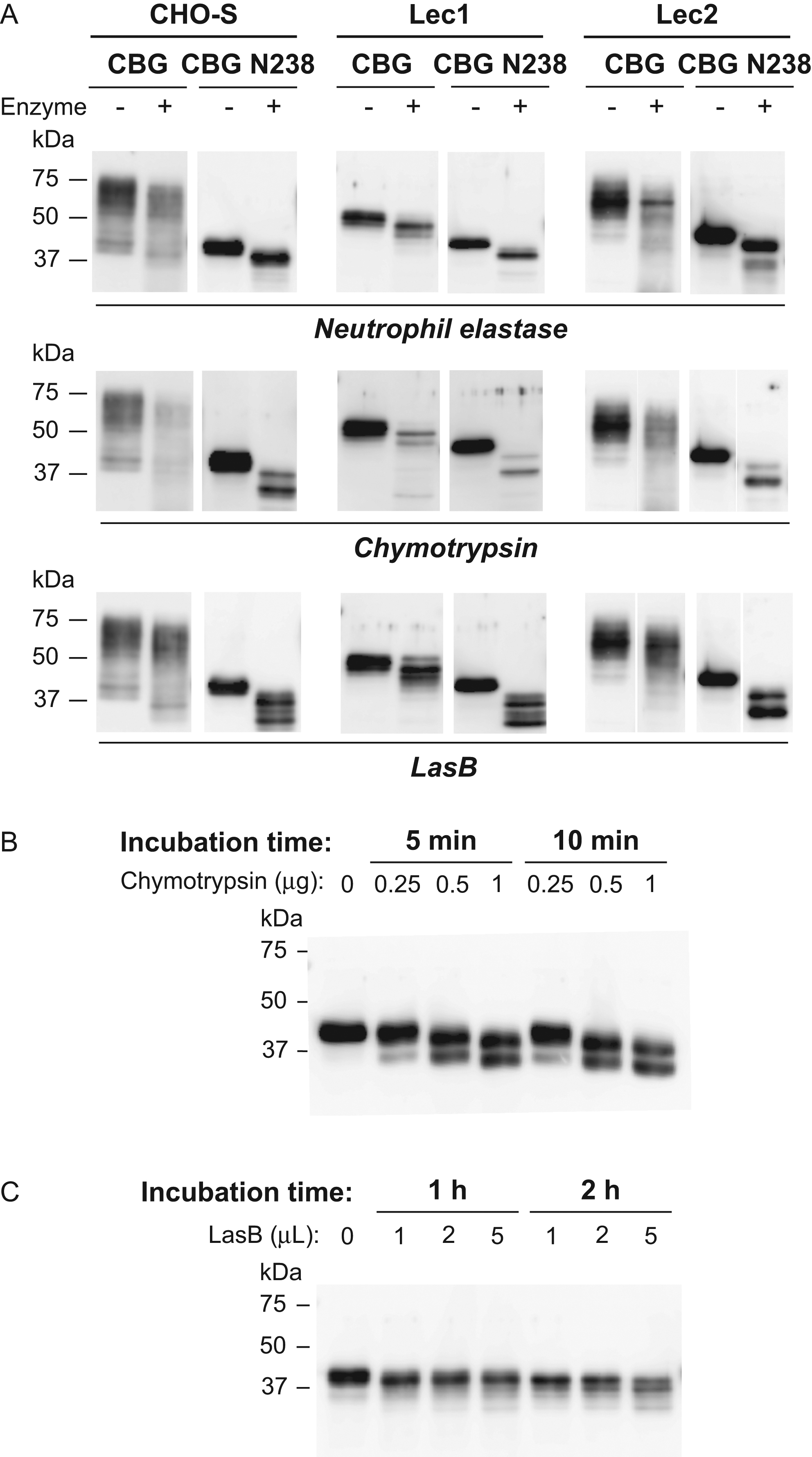 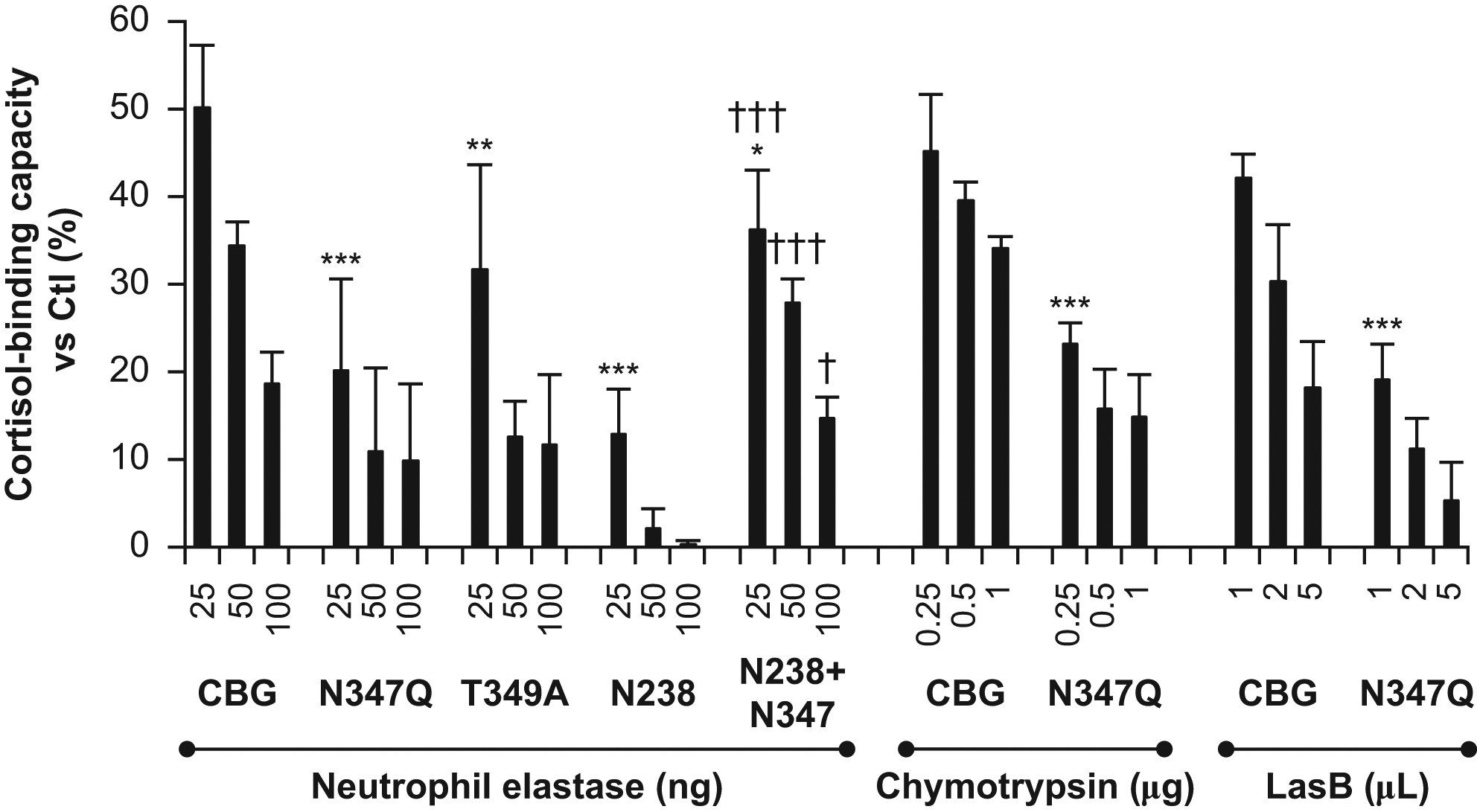 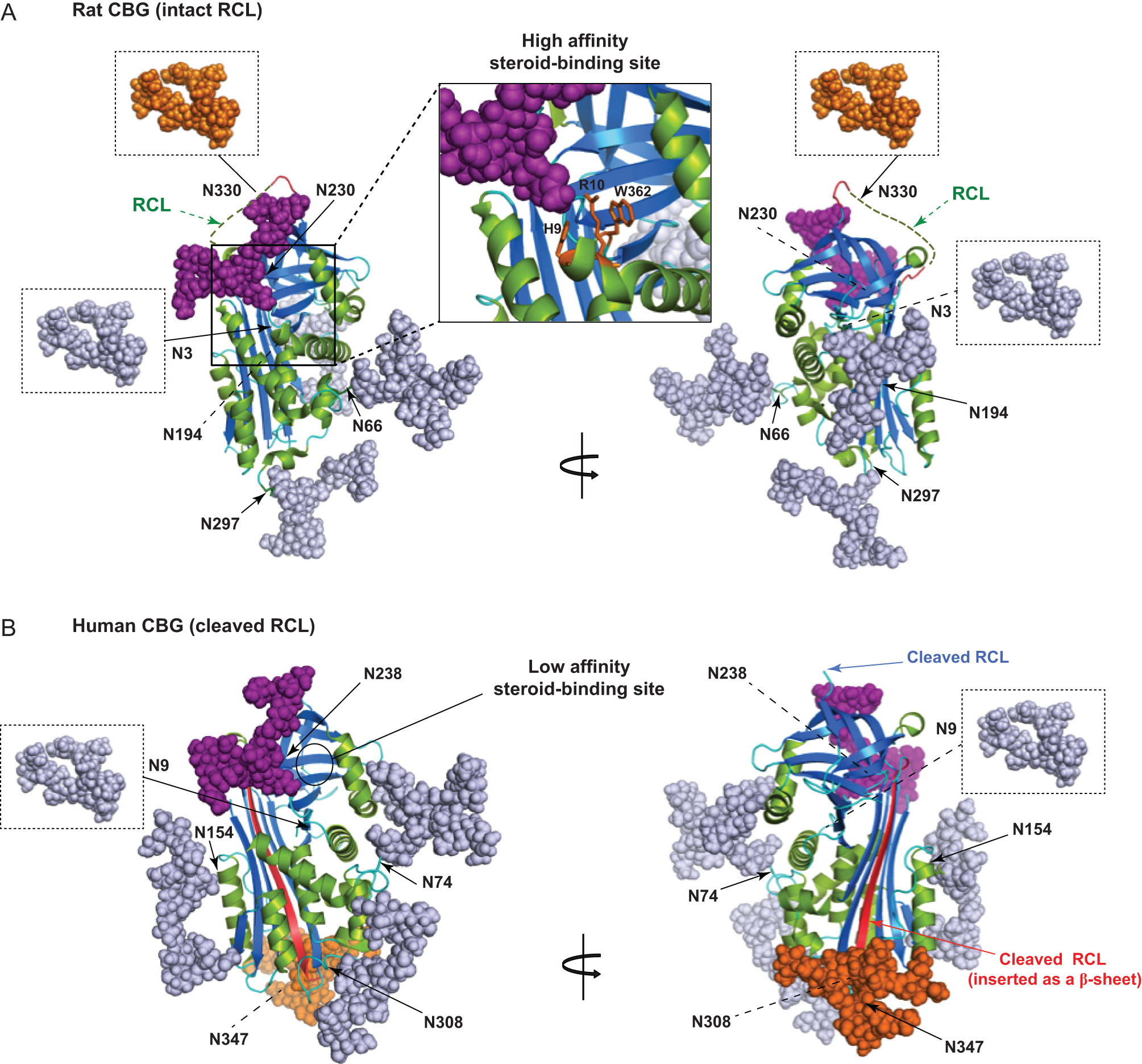