HOCl induces insulin resistance in 3T3-L1 adipocytes. (A) HOCl dose dependently inhibits insulin-stimulated glucose uptake. Serum-starved 3T3-L1 adipocytes were pretreated with various concentrations of HOCl (0, 50, 100, 200, 500, and 1000 μmol/l) for 1 h and stimulated with 100 nmol/l insulin or left unstimulated for 15 min and then incubated with [3H]-2-deoxyglucose (2DG) for 5 min. Glucose uptake was evaluated from [3H]-2-DG counts in each cell lysate. Results are expressed as mean±s.e.m. (n=5, *P<0.05 and **P<0.01 vs no HOCl treatment). (B, C and D) HOCl impairs insulin signaling pathway. 3T3-L1 adipocytes were pretreated with 200 μmol/l HOCl for 1 h and stimulated with or without 100 nmol/l insulin for 15 min. Membrane proteins were isolated using the Mammalian Membrane Protein Extraction Kit (Abcam, Cambridge, MA, USA). Cell lysis was subjected to SDS–PAGE and immunoblotted with indicated antibodies (B and C). Cell lysates were immunoprecipitated using Akt antibody and immunoblotted with phospho-GSK3β for in vitro Akt kinase assay using non-radioactive Akt kinase assay kit (Cell Signaling Technology, Inc., Beverly, MA, USA) (D). The blot is a representative of results obtained from five independent experiments.

HOCl promotes phosphorylation of IRS1 at Ser307 in association with JNK and IKKα/β. 3T3-L1 adipocytes were pretreated with 200 μmol/l HOCl for 1 h before treatment with 100 nmol/l insulin for 15 min or being left untreated, and levels of expression of phospho-IRS1-Ser307 and phospho-IRS-Tyr612 (A), IKK (B), and JNK (C) were determined by western blot analysis. The blot is representative of results obtained from five independent experiments.

PKCθ mediates phosphorylation of IKK, JNK, and IRS1 and insulin resistance. 3T3-L1 adipocytes were transfected with PKCθ siRNA or control siRNA for 48 h and treated with 200 μmol/l HOCl for 1 h and subsequently stimulated with 100 nmol/l insulin for 15 min or left unstimulated. Western blot analysis of protein expression and phosphorylation of PKCθ, IKK, JNK, and IRS1 (A and B). Akt kinase activity in cell lysates was measured (C). The membrane fraction was isolated and proteins were subjected to SDS–PAGE and immunoblotted with GTLU4 antibody (D). The blots are representative of results obtained from five independent experiments.

HOCl-induced insulin resistance is ONOO− dependent. 3T3-L1 adipocytes were serum starved overnight and treated with 200 μmol/l HOCl for 1 h in the presence of SOD1 (150 U/ml), catalase (100 U/ml), l-NAME (1 mmol/l), or uric acid (50 μmol/l), then stimulated with 100 nmol/l insulin for 15 min or left unstimulated. Cell extracts were immunoblotted with antibodies against IRS1 and Akt (A and B). Akt kinase activity in cell lysis was measured (C). Membrane proteins were isolated and then subjected to SDS–PAGE and immunoblotted with GTLU4 antibody (D). Blots are representative of results obtained from five independent experiments.

MPO deficiency prevents phosphorylation of IKK, JNK, and IRS1-Ser307 in WAT from HFD-fed mice. (A, C and D) WT and Mpo−/− mice were fed with ND or HFD for 16 weeks. Homogenates of epididymal WAT were prepared and levels of MPO, phosphorylation of IRS1, PKCθ, IKK, and JNK were analyzed by western blotting. (B) Expression of 3-chlorotyrosine in WAT was analyzed by using immunohistochemistry, magnification: 20×. (E) Schematic diagram of the relationship between for HOCl-induced phosphorylation of IRS at Ser307 and insulin resistance. 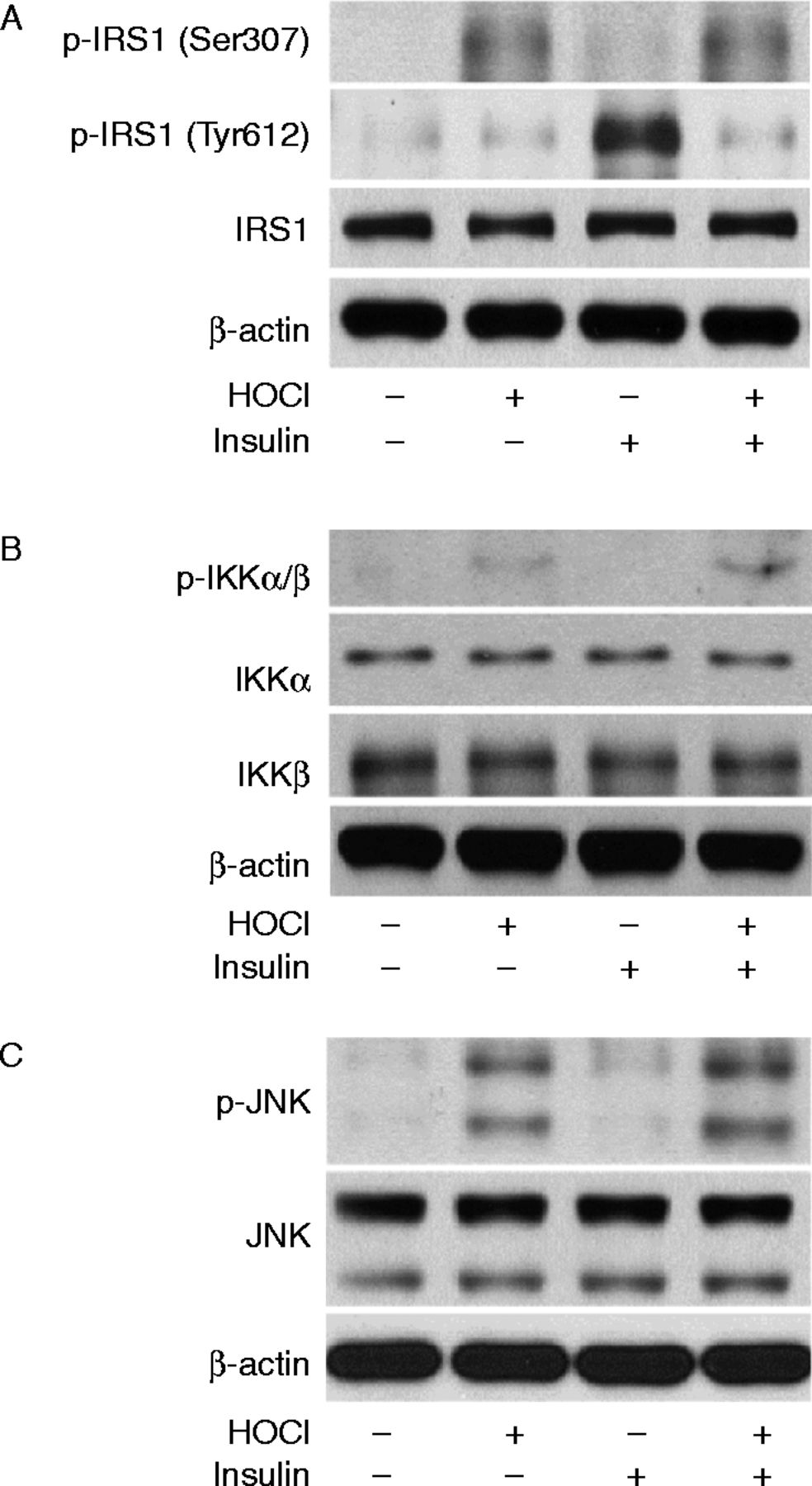 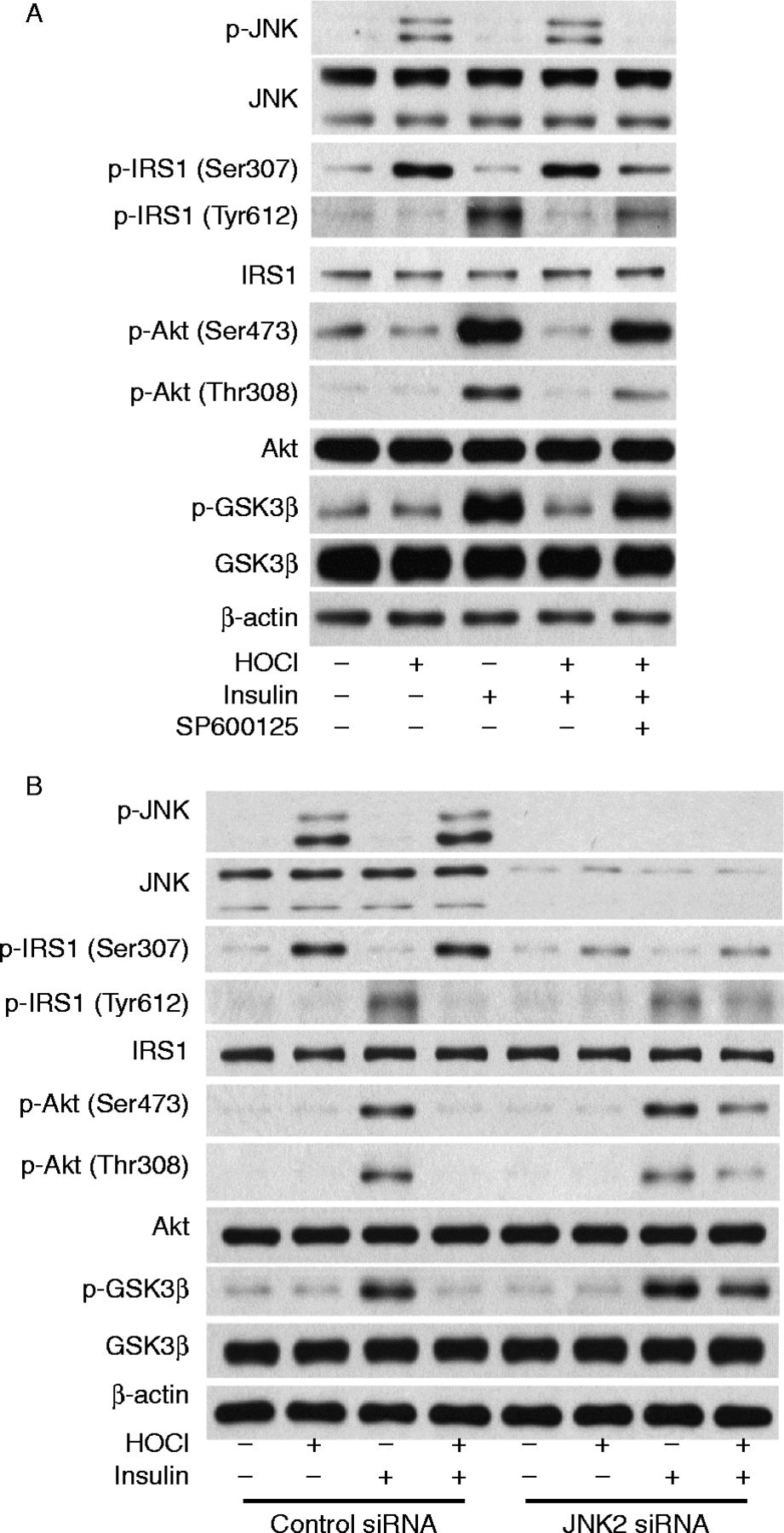 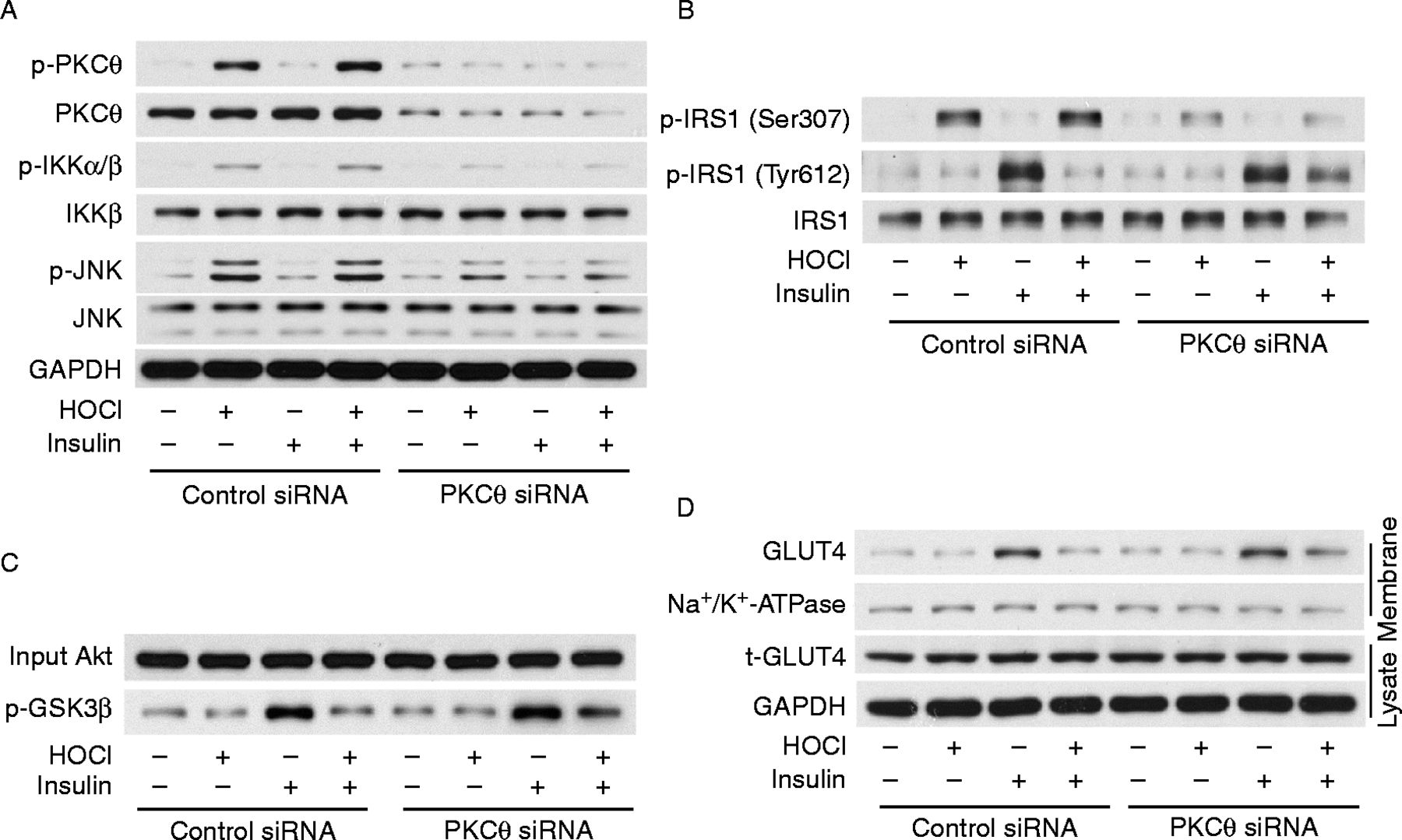 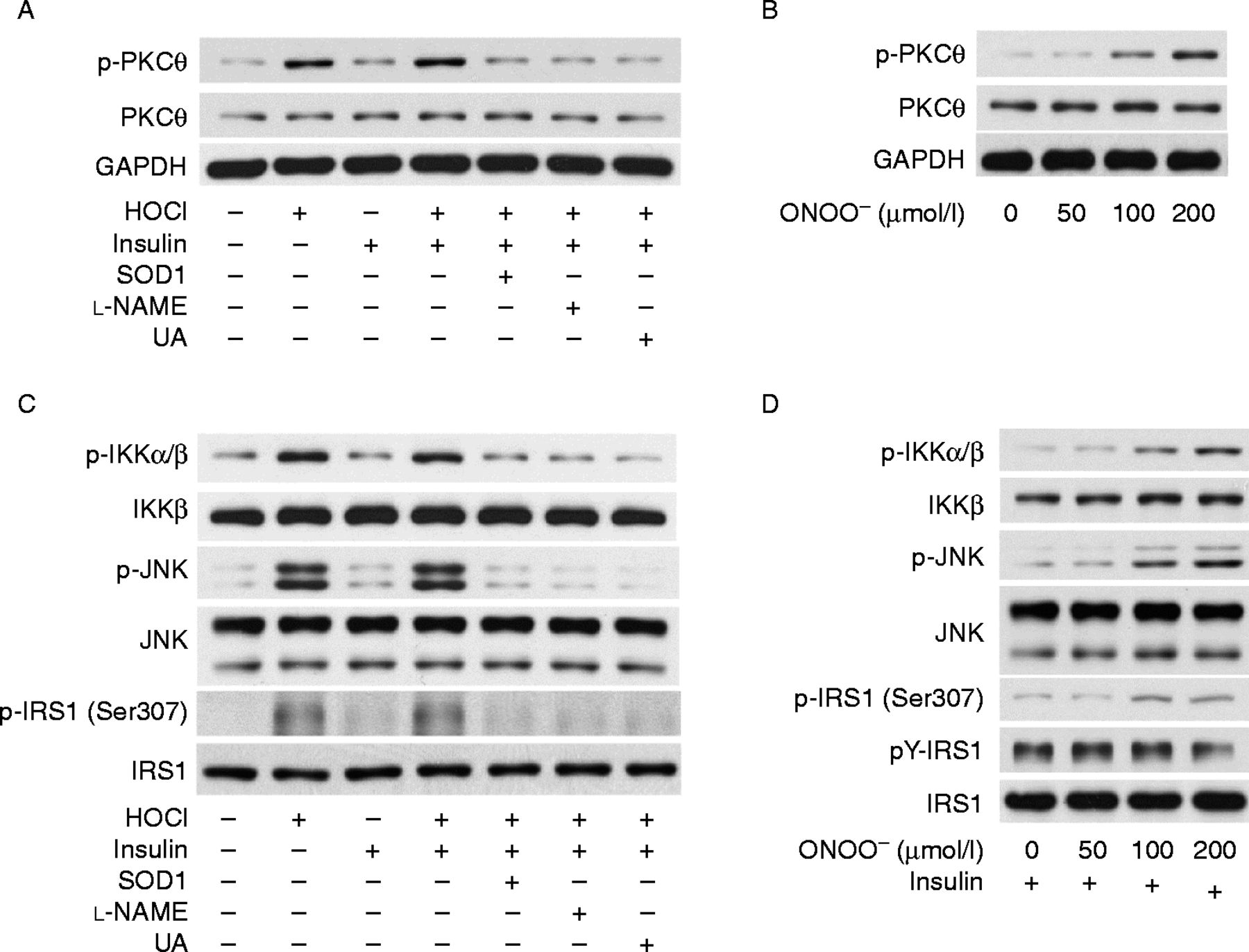 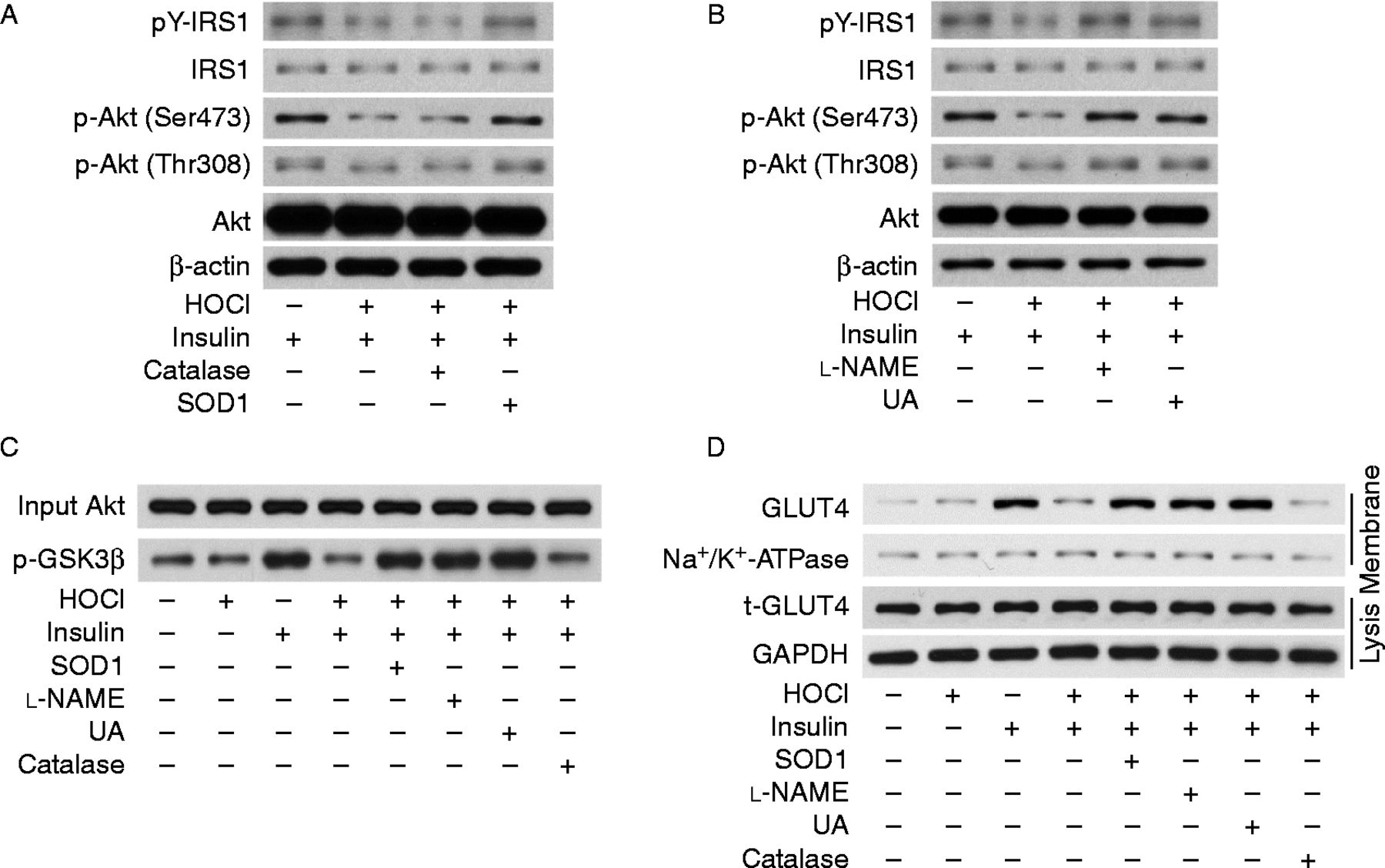 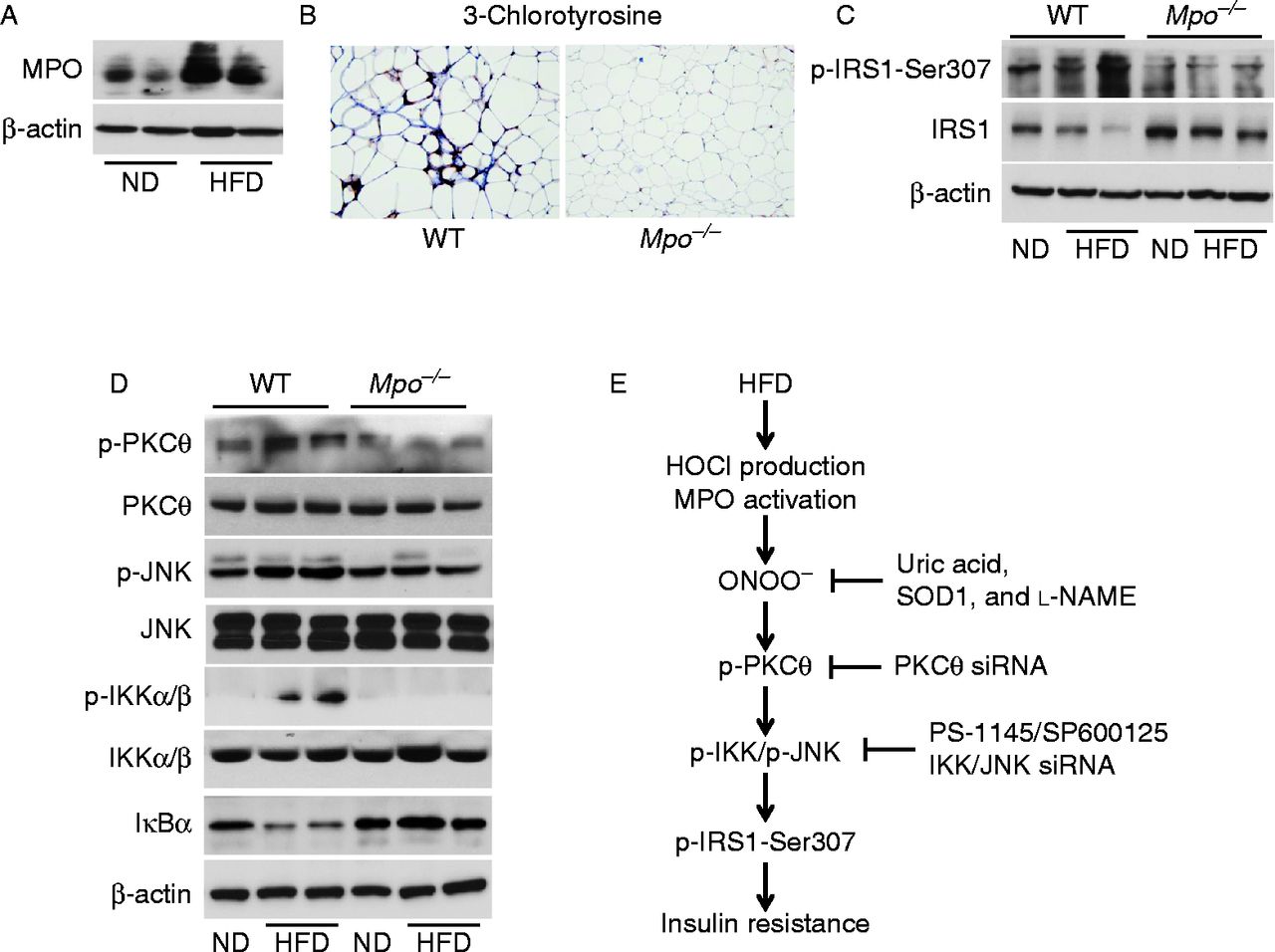