Images of visceral fat cells and liver cells. (A) Images of visceral fat cells after hematoxylin and eosin (HE) staining. The body weights of all rats were monitored every week and visceral fat weight was measured when the mice were anesthetized with Nembutal (100 mg/kg). The images are shown at 400× magnification. (B) Histological images of the livers of rats fed chow and HFD, as visualized by HE staining. All the images are shown at 400× magnification.

Inhibition of S100A16 transcription by E2. (A) The 1500-bp promoter region of S100A16 shows four estrogen receptor (ER) binding sites. (B) Results of the S100A16 luciferase reporter assay; S100A16 expression was reduced in the presence of E2, and this effect was ameliorated by the addition of tamoxifen. Results are expressed as mean±s.d. *indicates statistical significance (P<0.05 ). 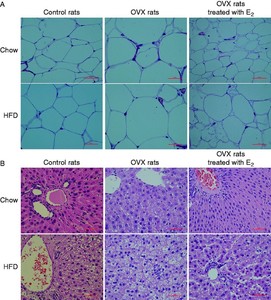 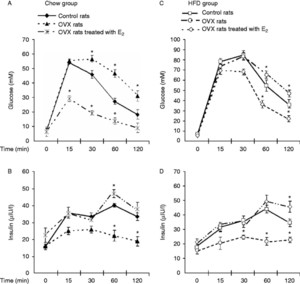 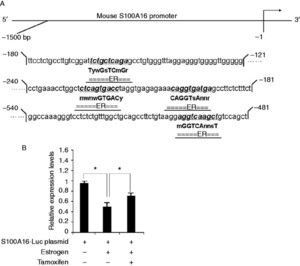