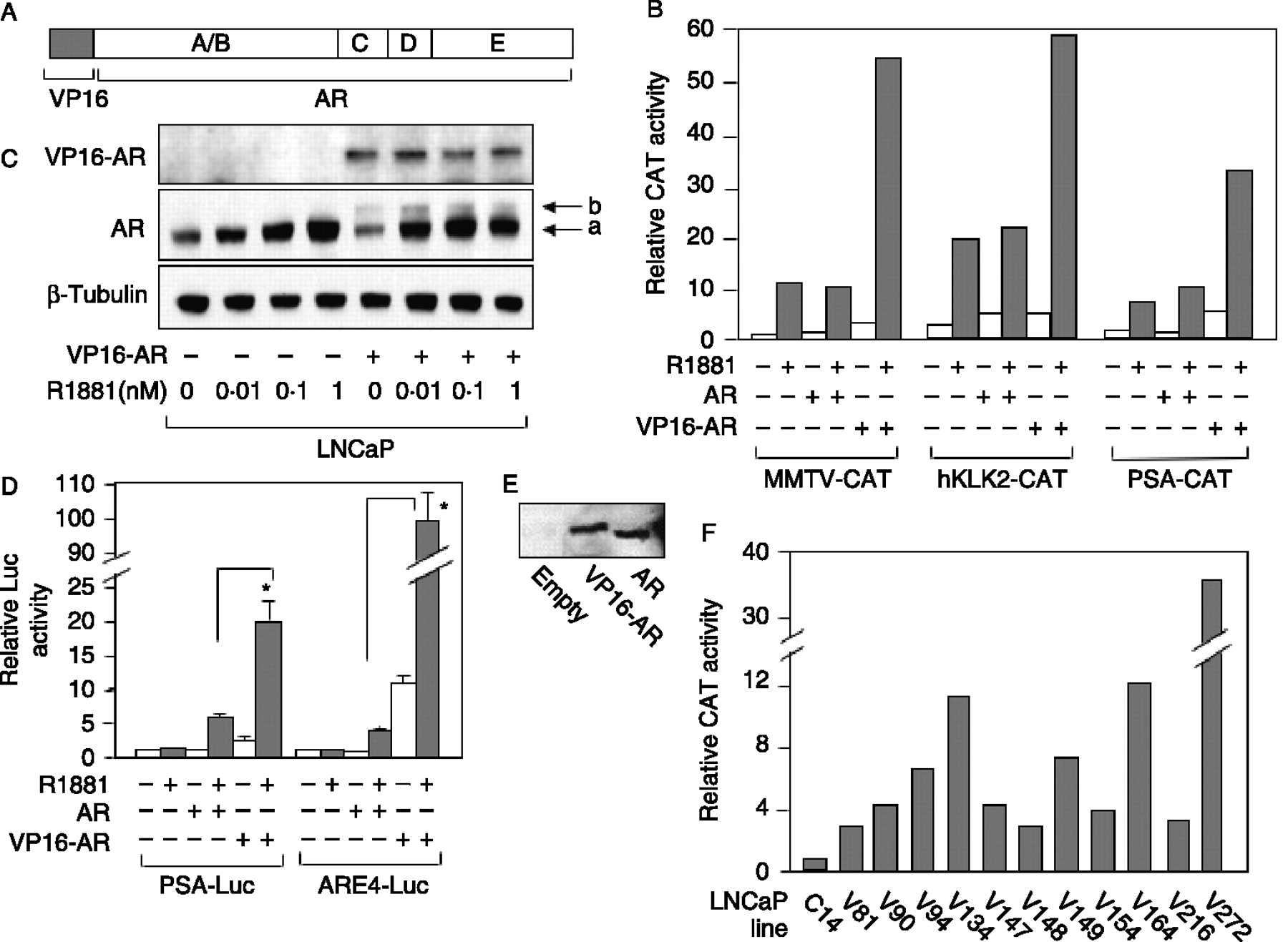 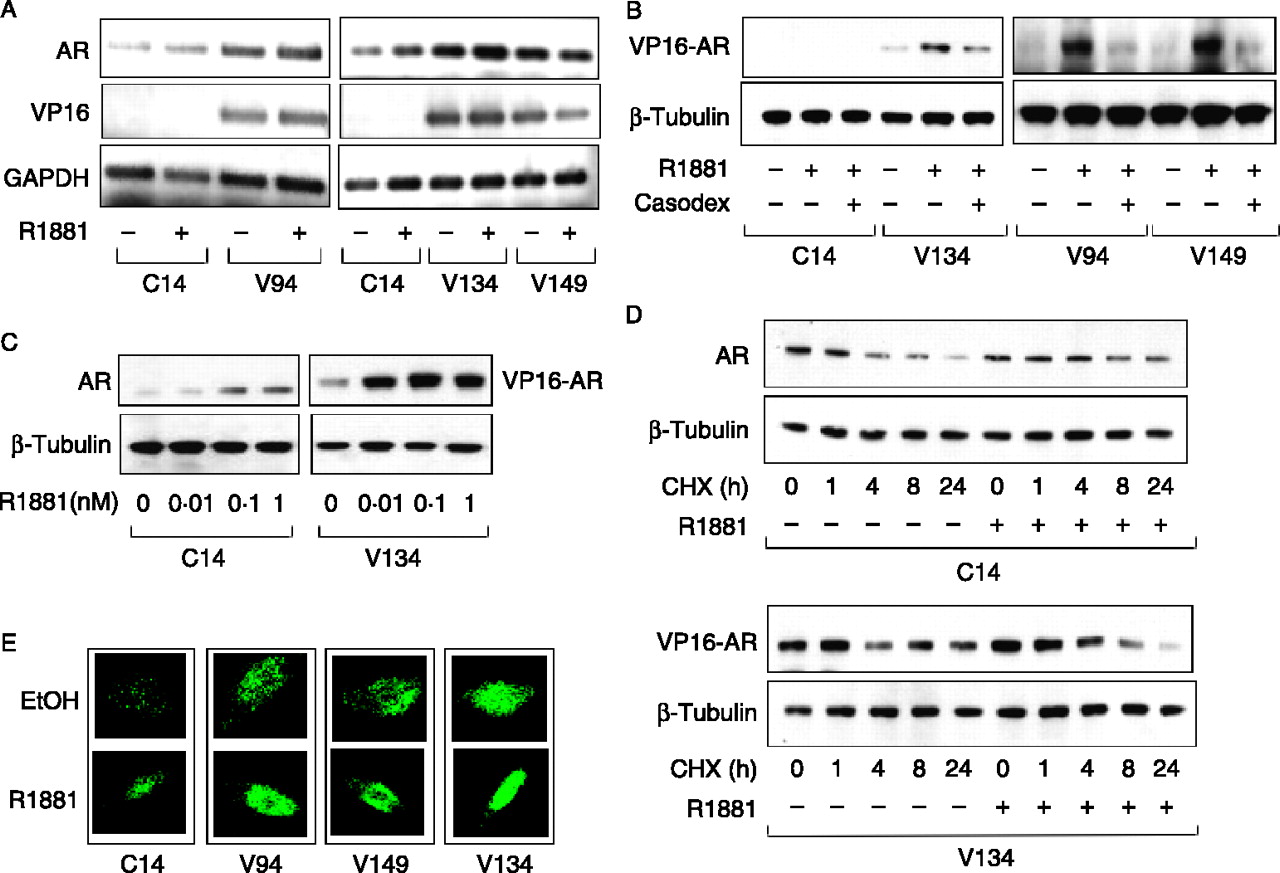 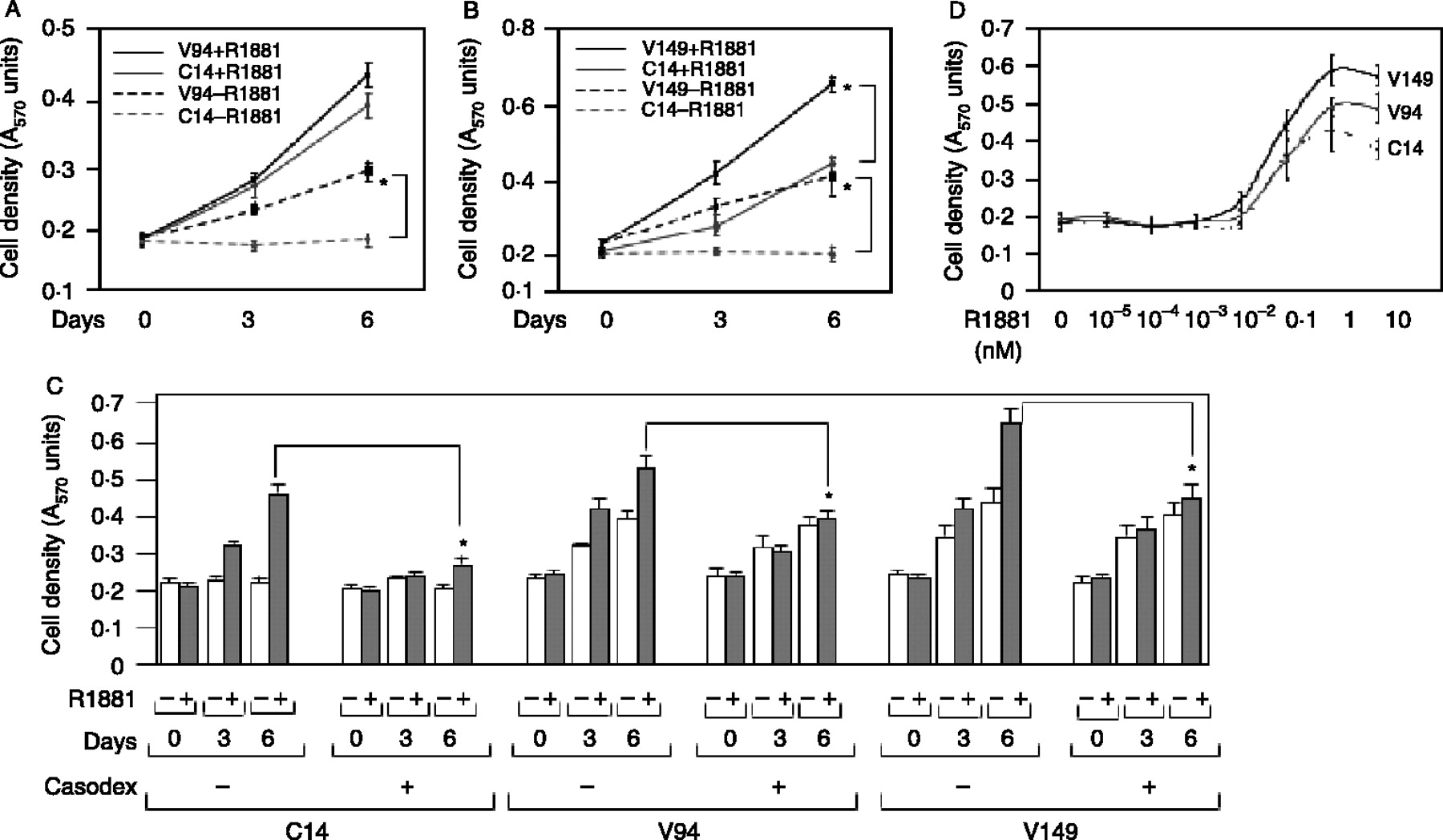 Expression of VP16-AR leads to androgen-independent growth of prostate cancer cells. (A) V94 or (B) V149 cells were measured for proliferation in the presence (solid black line) or absence (dashed black line) of 1 nM R1881 for 0–6 days in medium containing 5% DCC-extracted serum, and compared with the proliferation of C14 cells (solid gray line, with R1881; dashed gray line, without R1881). (C) C14, V94, or V149 cells were measured for proliferation under the same conditions as above, with or without Casodex. Bar graphs represent the average of three independent experiments plus the s.d. (D) The same three cell lines were grown for 6 days in a medium containing 1% DCC-extracted serum, with increasing concentrations of R1881, as indicated. Each point in A, B, and D represents the average of three independent experiments plus/minus the s.d. Asterisks indicate statistical significance (P<0.05) on the effect of Casodex on cell growth. 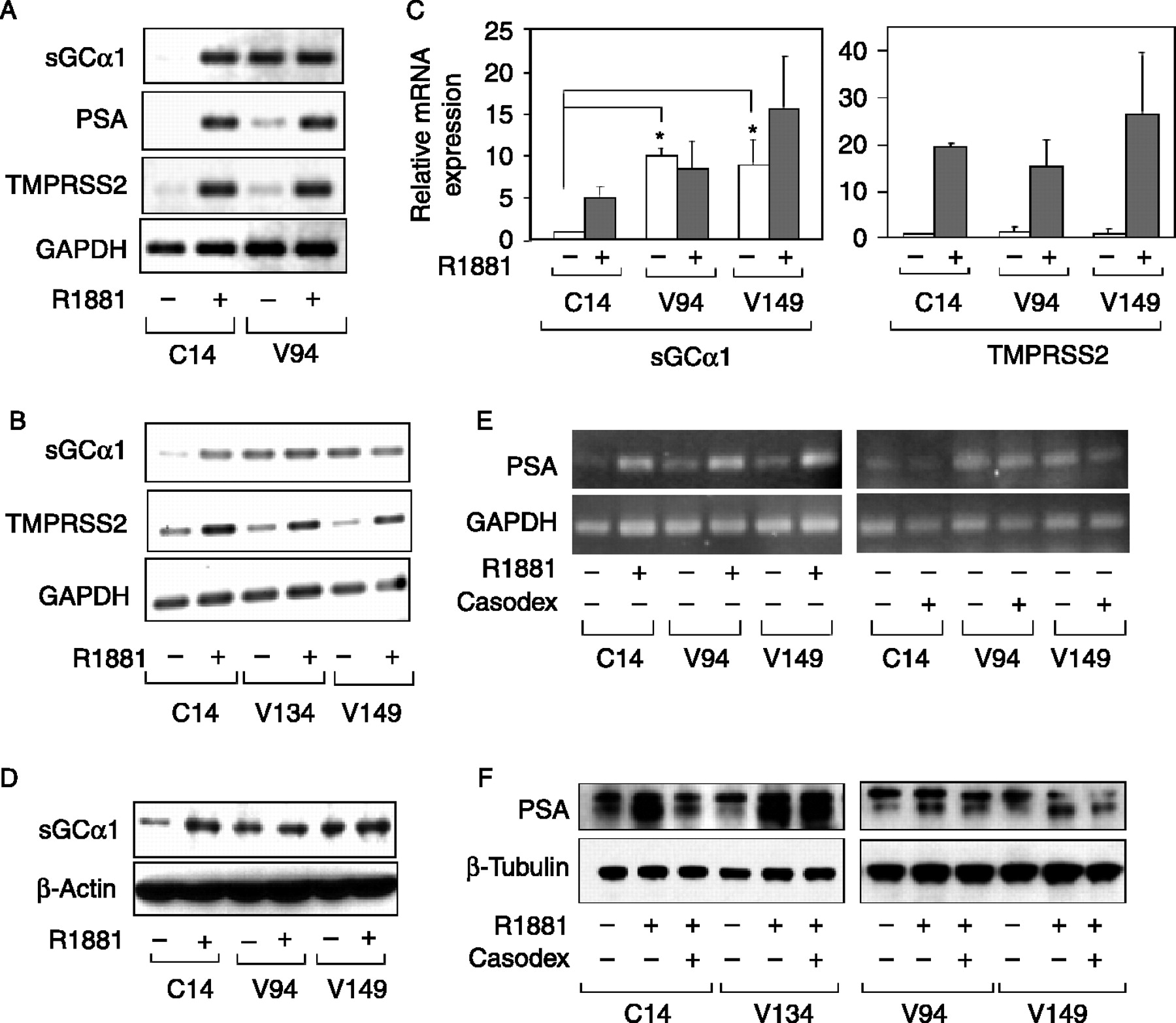 The expression of sGCα1 is constitutive in VP16-AR-expressing prostate cancer cells. The expression of sGCα1, PSA, and/or TMPRSS2 in C14, V94, V134, and V149 cells treated with or without 1 nM R1881 or 10 μM Casodex, as indicated, was measured by (A, B and E) semi-quantitative RT-PCR, (C) Q-RT-PCR, or (D and F) western blotting. Note that mRNA levels measured by Q-RT-PCR are represented relative to GAPDH expression (C). Note that the PSA protein in (F) is the lower band. Asterisks indicate statistical significance (P<0.05) on the sGCα1 expression in V94 and V149 cells when compared with C14 cells. Note that there is no statistically significant DHT effect on sGCα1 expression in either V94 or V149 cells (C). 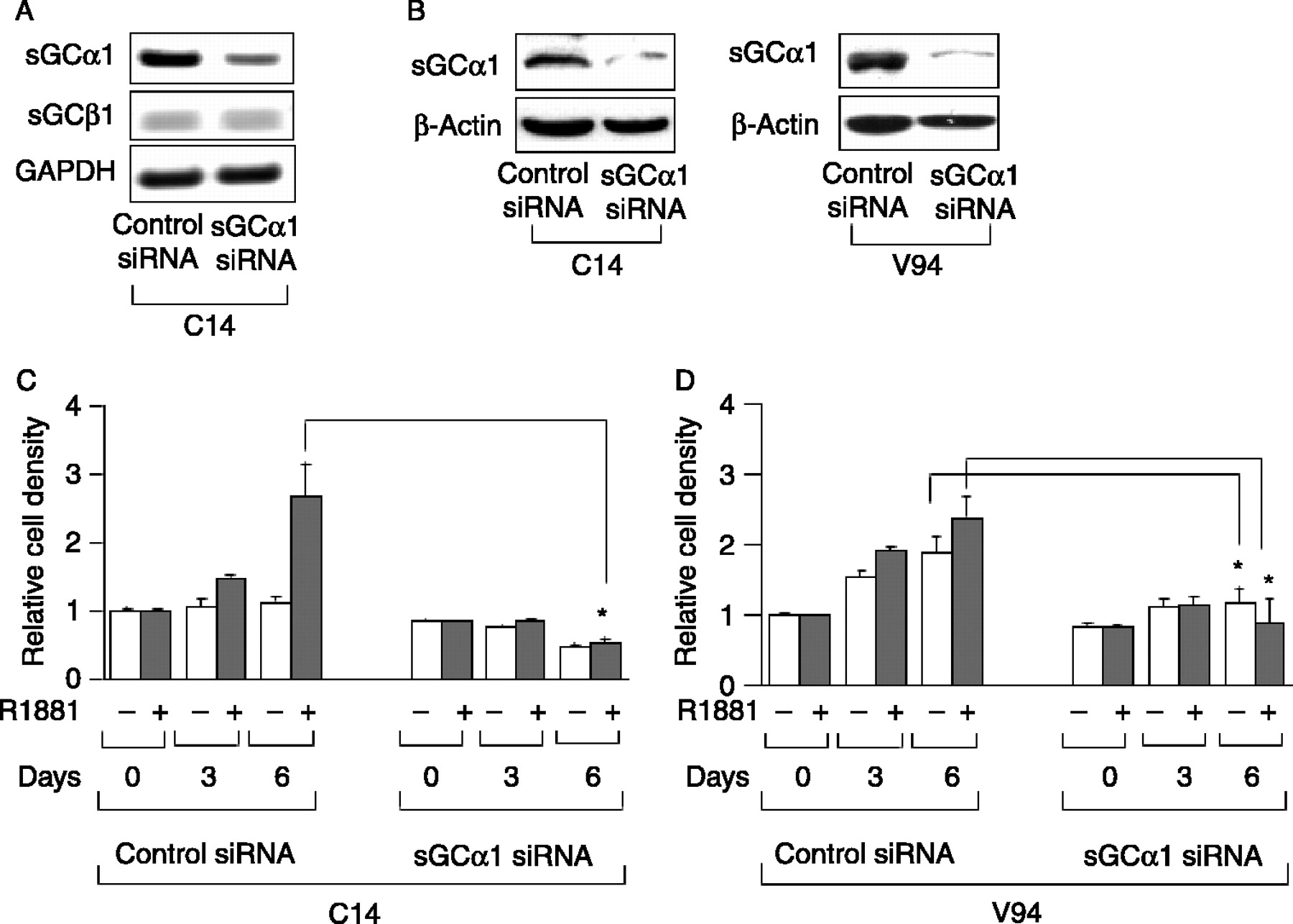