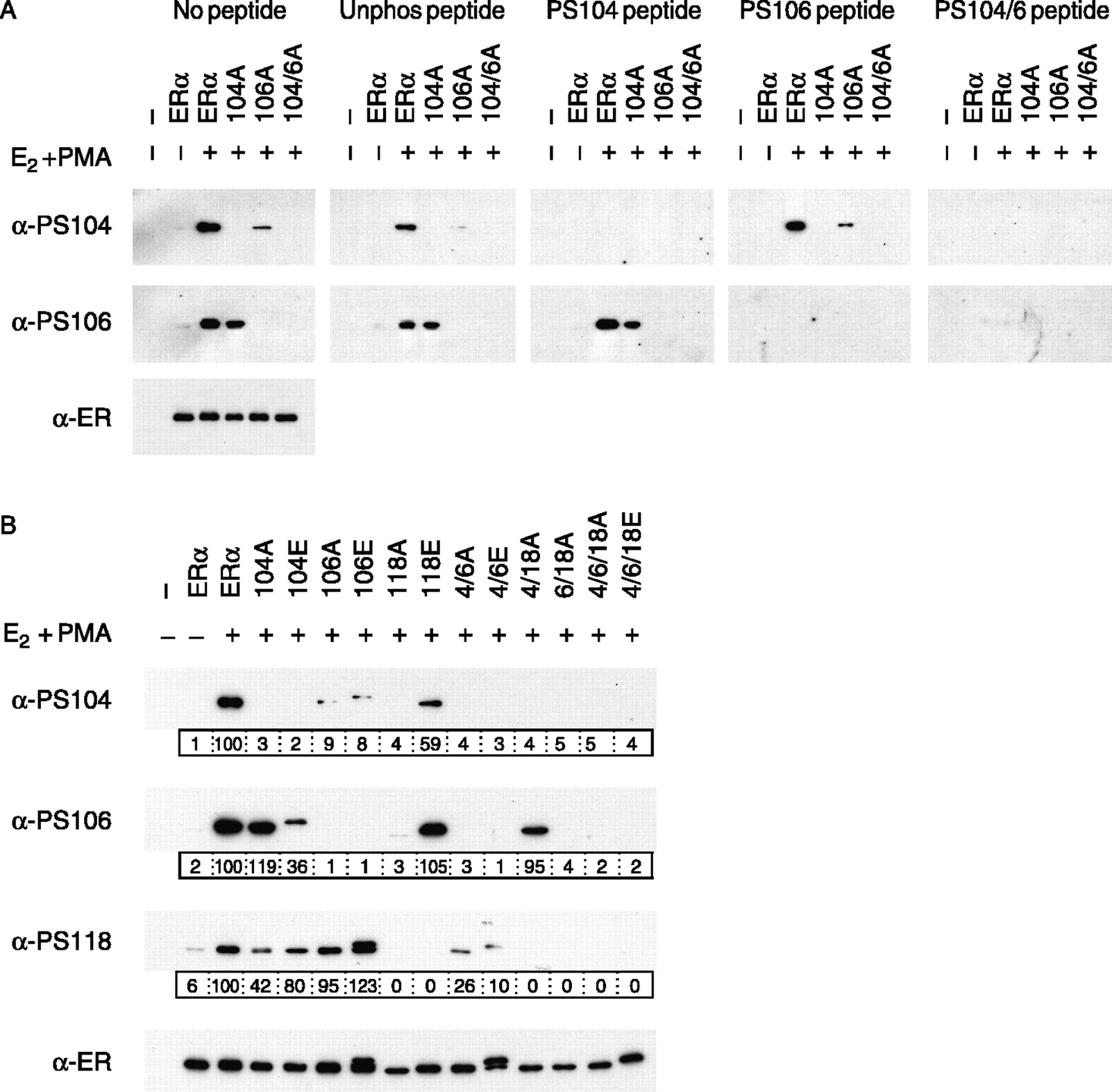 Characterization of phospho-specific antisera by peptide competition and phosphorylation site substitutions. Lysates prepared from COS-1 cells transiently transfected with an empty expression vector (−), or expression vectors for wild-type ERα or ERα in which S104, S106, and/or S118 had been substituted by alanine (A) or glutamic acid (E), as indicated, were immunoblotted using antibodies for total ERα (α-ER), or for ERα phosphorylated at S104 (α-PS104) or S106 (α-PS106). Cells were treated with ethanol solvent (−), or 17β-estradiol (E2; 10 nM) and 12-tetradecanoylphorbol-13-acetate (PMA; 100 nM), for 30 min prior to harvesting. (A) Replicate blots were incubated with primary antibody (no peptide), or antibody that had been pre-incubated with a 100-fold excess (10 μg/ml) of a peptide encompassing the ERα phosphorylation site; either unphosphorylated (unphos) or phosphorylated (PS104, PS106, or dual PS104/6) versions, as indicated. (B) Lysates were additionally immunoblotted using antibody for ERα phosphorylated at S118 (α-PS118). Levels of phospho-ERα were quantitated in relation to the respective total ERα level (boxed, below each immunoblot). 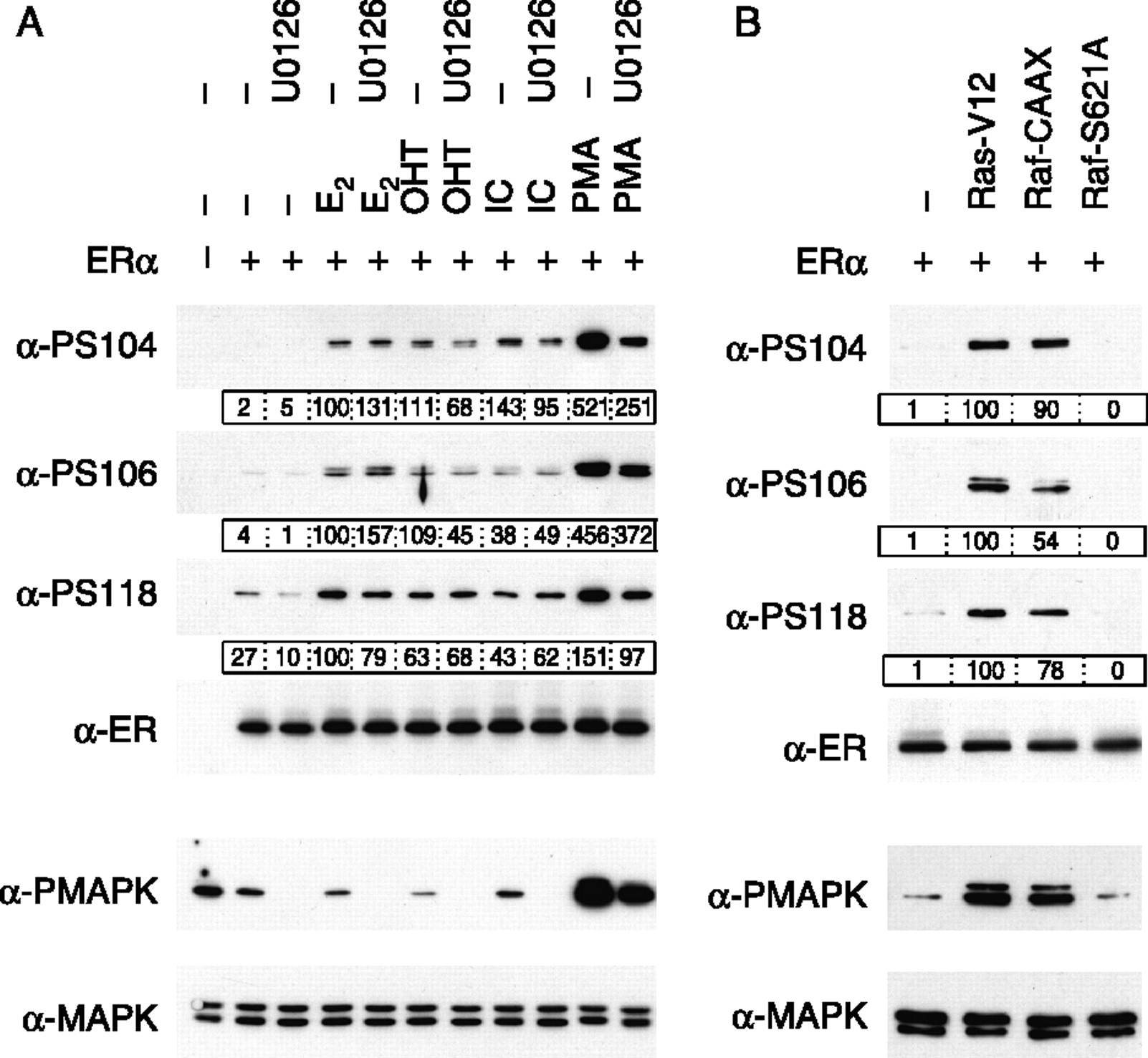 Phosphorylation of S104 and S106 is stimulated by ERα ligands and by activators of MAPK. Immunoblots of lysates prepared from COS-1 cells transfected with empty expression vector (−) or expression vector for ERα, were performed as for Fig. 1. Lysates were additionally immunoblotted using antibodies for total (α-MAPK) and phosphorylated (α-PMAPK) Erk1/2 MAPK. Levels of phospho-ERα were quantitated in relation to the respective total ERα level (boxed, below each immunoblot). (A) Cells were pre-incubated with U0126 (10 μM) for 1 h, followed by the addition of E2 (10 nM), 4-hydroxytamoxifen (OHT, 100 nM), ICI 182 780 (ICI; 100 nM) or PMA (100 nM), as indicated, and cells harvested 30 min later. (B) Cells were transfected with expression vector for ERα, together with expression vectors for Ras-V12, Raf-CAAX or Raf-S621A, as indicated.

S104 and S106 are phosphorylated by Erk2 in vitro. (A) Purified GST-ERα was incubated with a panel of purified kinases, as indicated, according to manufacturer's instructions, followed by immunoblotting with phospho-specific antibodies (α-PS104, α-PS106, and α-PS118) or α-ER. The filled arrows indicate the position of GST-ERα, and the open arrow indicates a non-specific product seen with α-PS106 antisera. (B) Purified GST-ERα was incubated with increasing amounts of purified Erk2 MAPK (0, 5, 10, 20, 50, and 100 ng) in the absence of ligand (NL) or in the presence of E2 (10 nM), followed by immunoblotting as before. (C) Purified GST, or wild-type GSαT-ERα-ΔLBD (ERα-ΔLBD) or GST-ERα-ΔLBD in which S104, S106, and/or S118 had been substituted by alanine (A), as indicated, were incubated with Erk2 in the presence of 32P-γATP, followed by SDS-PAGE and autoradiography of the dried gel. Immunoblotting a duplicate gel with α-ER was used to determine the relative levels of each mutant. The bar chart shows quantification of each 32P signal relative to the respective total GST-ERα-ΔLBD level. 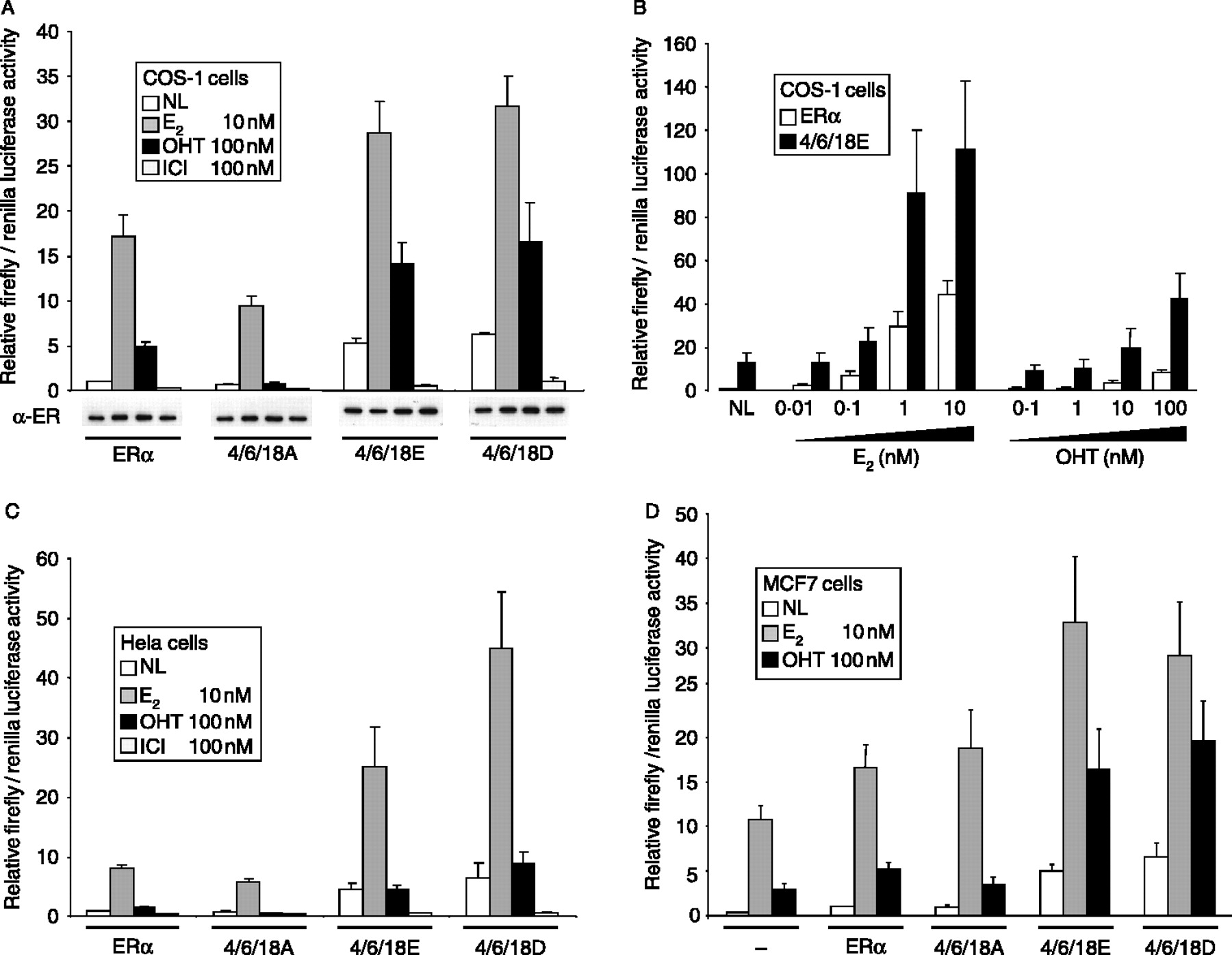 Effect of phosphorylation site mutations on ERα activity. (A and B) COS-1, (C) HeLa, and (D) MCF7 cells were co-transfected with the ERE-3-TATA-firefly luciferase reporter gene, a renilla luciferase control reporter gene, and expression vectors encoding wild-type ERα (ERα) or ERα in which S104, S106 and S118 were substituted by alanine (4/6/18A), glutamic acid (4/6/18E) or aspartic acid (4/6/18D), as indicated. Cells were treated with ethanol solvent (no ligand; NL), E2 (10 nM), OHT (100 nM) or ICI (100 nM), as indicated, except (B) where E2 was added at 0.01, 0.1, 1, and 10 nM and OHT at 0.1, 1, 10, or 100 nM. The cells were harvested for luciferase assays 20 h later. Results are presented as relative ratios of firefly to renilla control luciferase activities, as described in Materials and methods. (A) A parallel transfection series was assayed for ERα expression by immunoblot (α-ER). (D) MCF7 cells were additionally transfected with an empty vector control (−) in order to determine the contribution of endogenous ERα. 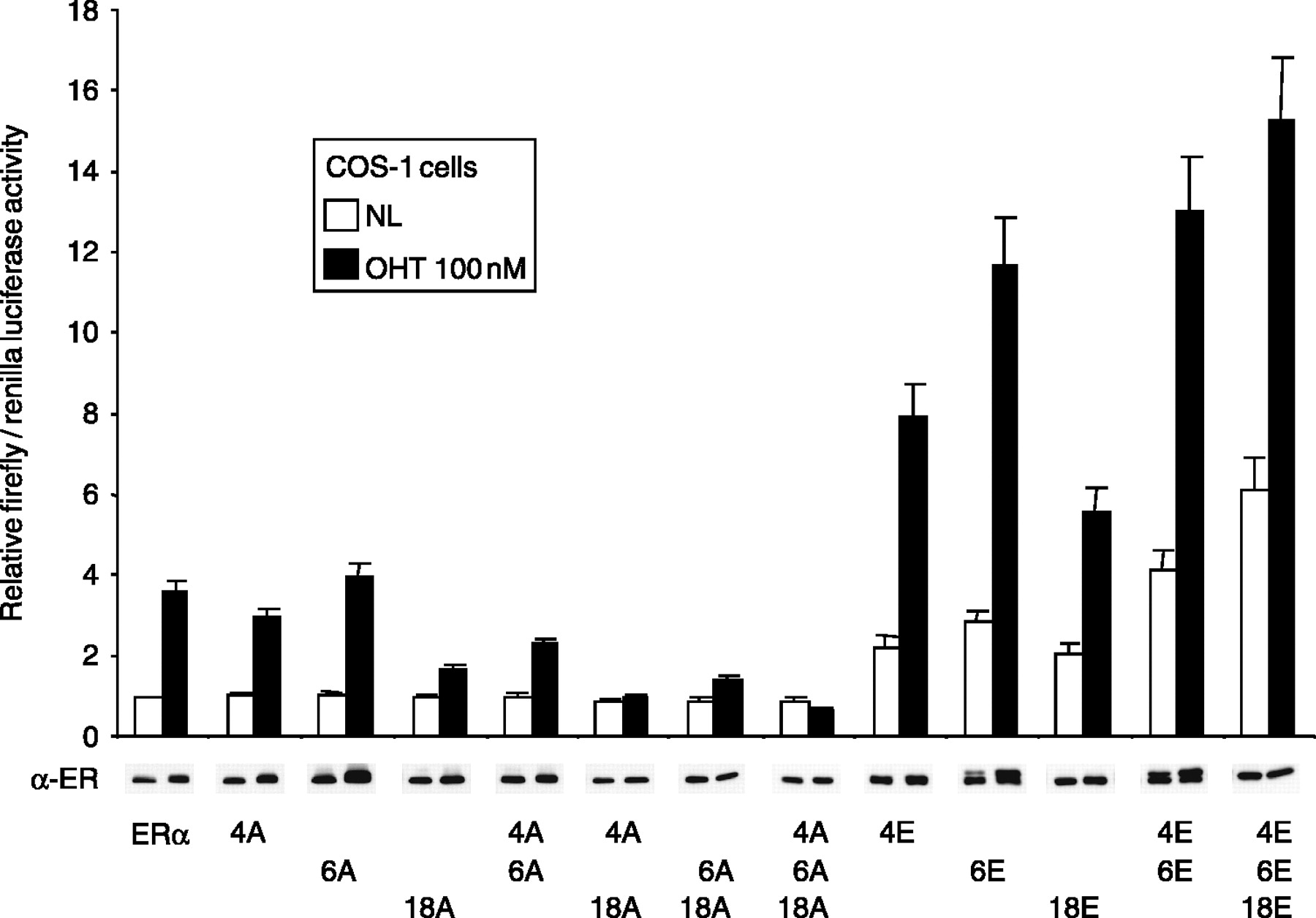 Effect of individual site mutations on ERα activity. COS-1 cells were co-transfected with ERE-3-TATA-luc, pRL-TK, and the wild-type ERα expression vector (ERα) or versions with alanine or glutamic acid substitutions, as indicated. Cells were treated and luciferase assays carried out as for Fig. 4. A parallel transfection series was assayed for ERα expression by immunoblot (α-ER). 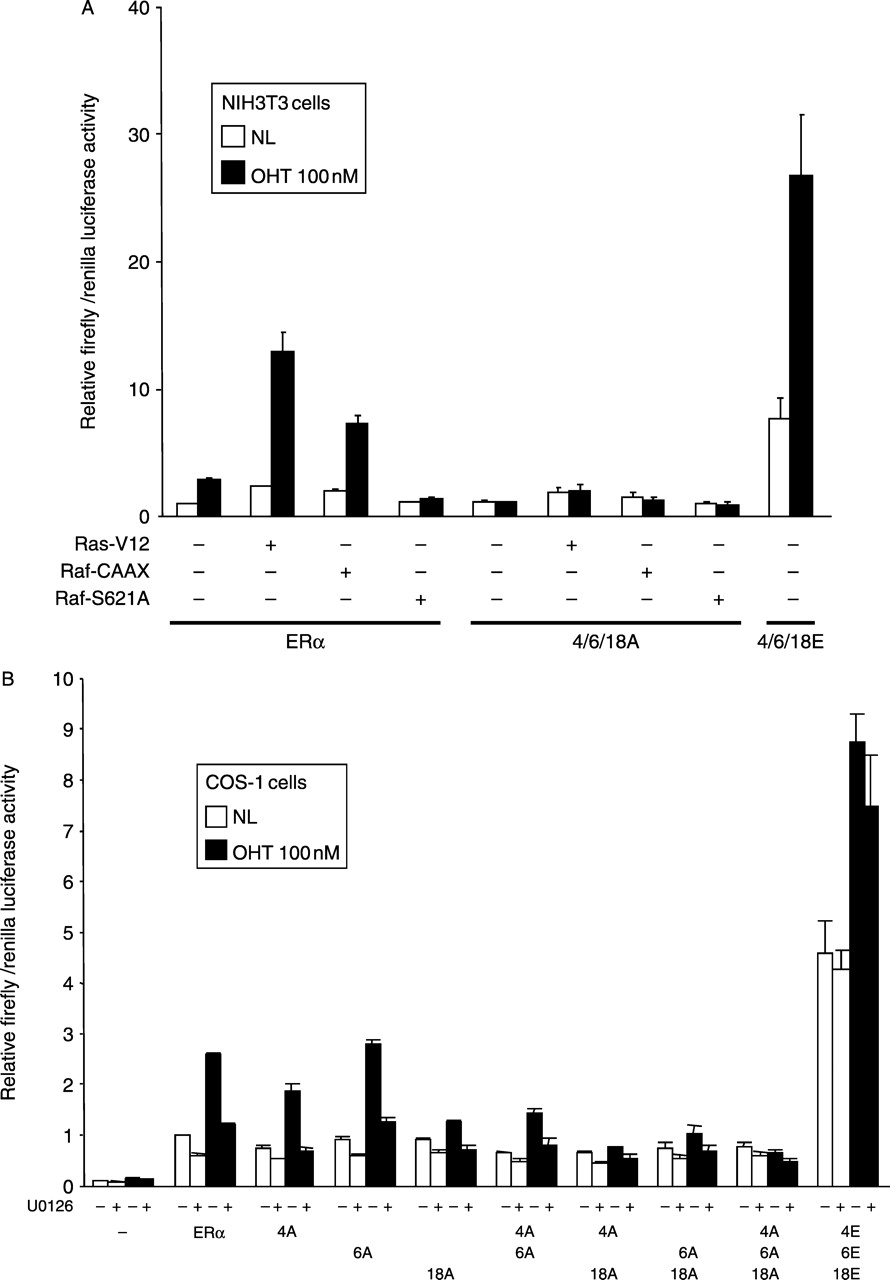